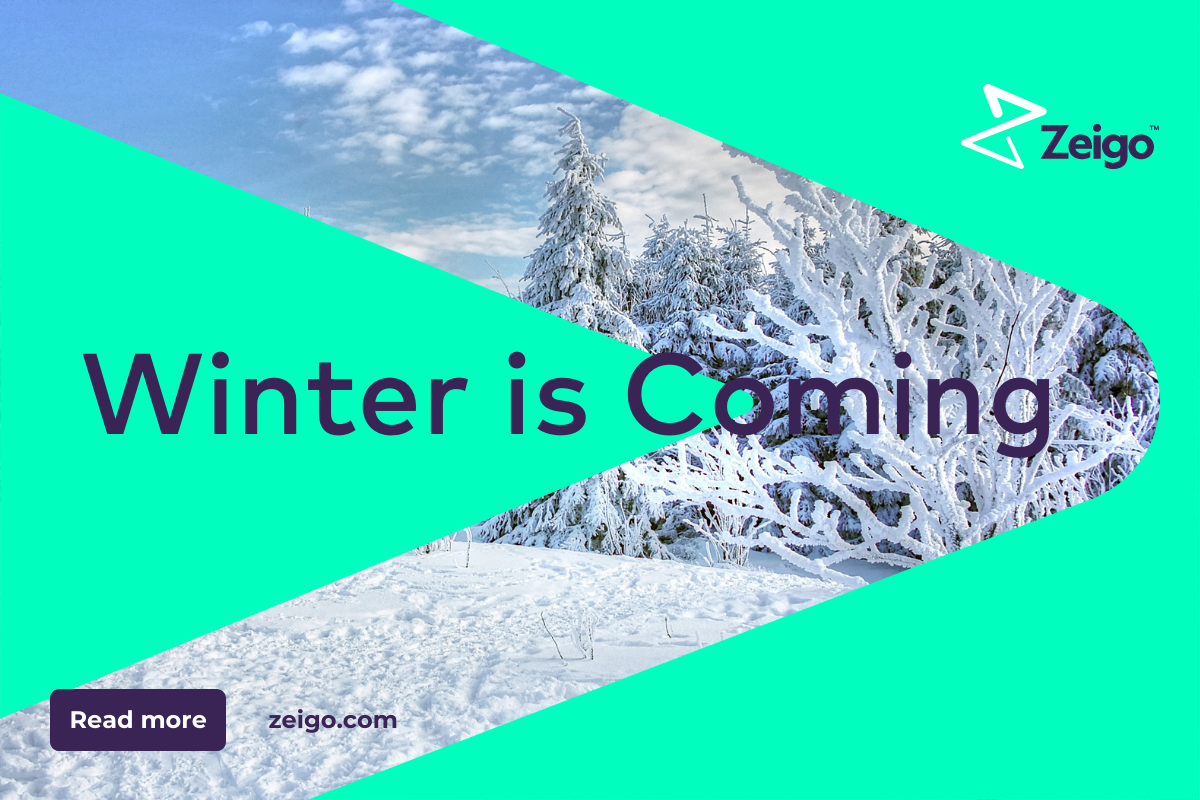 A looming Winter energy crisis is driving panic buying and widespread worries about consumers succumbing to energy poverty. The bloated energy bills threatening to wreck household finances around Britain will eat into business revenues, too, ruining forecasts and shredding profitability for those caught unprepared.

Nordic energy suppliers say they are struggling to meet demand, while some French electricity retailers have announced that they may have to close their doors. There’s little indication the situation will improve anytime soon as demand continues to soar back from a Covid-driven lull.

Energy traders may find opportunities in volatility, while high prices can give a short-term boost to battery operators and generators. But business consumers will bear the brunt of the inevitable downside risks: higher overheads and uncertainty about the future.

Jeff Currie of Goldman Sachs commodities research unit told Reuters in September that ‘we’re in the first innings of a multiyear commodity super cycle that could extend for a decade or more’. Energy price rises are being driven by dynamics like the push to address climate change and income inequality, he said, leading to structural rises in commodity demand across the board.

The demand-supply crunch hitting gas, oil and coal has had a domino effect on power prices that’s spreading across Europe. In late September, Norwegian grid operator Statnett SF warned that electricity supplies in the country’s southwest are being pressurised due to lower-than-expected inflows and waning water reserves.

That part of Norway is an essential hub for power shipments abroad, connected by seabed cable to grids in Germany, Denmark, and the UK.

Europe’s mid-Summer power prices were relatively stable at an average of €87.39/MWh, despite worries about a third wave of COVID-19 slowing down economic growth in the EU’s major economies.

Then in late July, unplanned pipeline maintenance in Norway and a lack of LNG deliveries from abroad reduced stockpiles in storage facilities, leading to sharp increases in month-ahead gas and electricity prices. In the UK, power prices reached £103/MWh on 30th July, a high not seen for over 12 months. 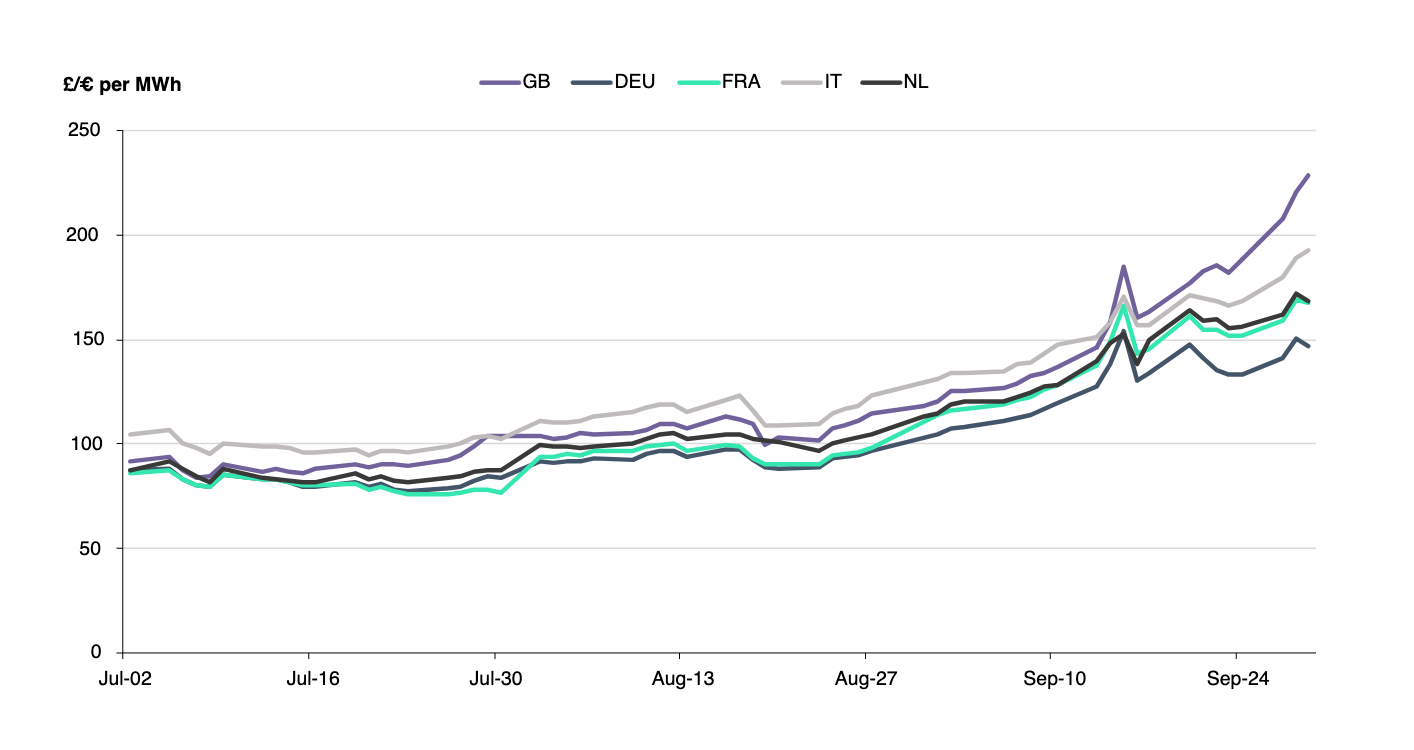 In August, the trend intensified. European month-ahead power prices surged to highs of €102.50/MWh, prodded upward by tightening gas supplies and worries that Hurricane Ida might cut off oil supplies from America. Speculation around the likely completion date of Nord Stream 2 and indications that gas storage facilities were running out of inventory were other factors driving power market action.

This month has taken power markets into unknown territory. Baseload month-ahead electricity prices in the UK have reached £220/MWh — the highest they’ve ever been. Alongside a perfect storm of market factors, energy supplier EDF’s surprise decommissioning of the two nuclear reactors in Dungeness, paired with this month’s fire at the IFA interconnector site in Sellindge, Kent have added more supply pressure at exactly the wrong time.

Now that Autumn has arrived, a full-scale energy crisis is settling on the UK and parts of Europe. The onset of Winter weather threatens business balance sheets — and, depending on the sector, could affect the basic operational stability.

Businesses are going to feel the pinch through Q4 and likely into Q1-22 as well. Small and medium-sized organisations will see their monthly bills rise sharply, but large energy consumers with short, one-year contracts for energy supply are particularly vulnerable.

They could be forced to lock-in pricing at double their normal tariffs to hedge against even worse rises later.

To mitigate the problem, any business in that position should look to transition to long-term power price agreements (PPAs). PPAs are one of the most effective hedging mechanisms against power price volatility, locking in discounts that defy sudden swings in prevailing market rates.

Despite prices rising over 40% across Europe, PPA offer prices have not reflected this, partly because PPA pricing is influenced more by long-term variables such as construction costs of the renewable asset (solar module/turbine costs), logistic costs and changes in national and European level policy that might affect developers internal power price forecasts.

While big energy consumers have the scale and leverage to negotiate PPAs on their own, mid-sized companies with smaller volume requirements often struggle to secure significant discounts. For them, aggregated PPAs can offer an effective alternative to going solo.

With monthly energy bills set to skyrocket, smaller businesses should consider forming a consortium and using an aggregated PPA to purchase energy at a discount, either from a single developer or across multiple projects. By acting in concert, each business in the buying group can benefit from the added negotiating leverage that comes with a bulk purchase.

Will PPAs work under the unprecedented market conditions impacting the UK and Europe? An analysis conducted by Zeigo and S&P Global Platts in early September found that the tariffs being negotiated in European PPA agreements remained stable despite spiking merchant prices.

With an average contract term of 11.5 years, corporate energy buyers were locking in significant discounts while the PPA market as a whole proved remarkably resistant to inflationary pressures — despite prices rising over 40% across Europe.

In a time of extreme energy market uncertainty, organisations need to protect themselves against spiking power prices. PPAs can be a powerful hedge against price volatility, as well as a source of stability when the risk of supply disruption could jeopardise operations and revenues.

Want to find out more? Request access to the Zeigo platform here you can start your PPA journey.